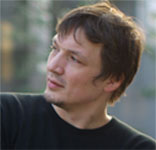 Ivan Poupyrev is a former Principal Research Scientist at Disney Research, where he designed and investigated user interfaces for future digital living, working, and entertainment environments.

In his field of research, Ivan is particularly interested in creating interfaces and technologies that can seamlessly blend digital and physical properties in devices and everyday objects. The results of his research have been presented at major international conferences, reported in popular media, and released on the market in various products.

Born in the former USSR, Ivan graduated from Moscow Airspace University in 1992. While working on his Ph.D. at Hiroshima University, he stayed for three years at the University of Washington working on 3D user interfaces for virtual and augmented reality environments. In 2009, he moved to Disney Research, Pittsburgh, from Sony Computer Science Laboratories, Tokyo, where he has been doing research in haptics and physical interfaces for nearly nine years.