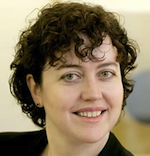 Carol O’Sullivan is the Professor of Visual Computing at Trinity College Dublin, where she has been on the faculty since 1997, and a Senior Research Scientist with Disney Research. She was a Visiting Professor at Seoul National University from 2012-2013. Her research interests include perception, animation, virtual humans, and crowds. She is the co-Editor in Chief of the ACM Transactions on Applied Perception and was formerly Associate EIC of IEEE CG&A. She has served on many editorial boards and program committees, including the SIGGRAPH and Eurographics papers committees, and has been program or general chair for several conferences, e.g., Eurographics, ACM Symposium on Computer Animation, ACM Symposium on Applied Perception, and others.