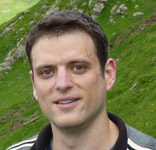 Dr. Stelian Coros was a Research Scientist at Disney Research, where he leads the Robotics and Mechanical Characters group. Before joining Disney Research, he obtained his Ph.D. in Computer Science from the University of British Columbia. Stelian’s research lies at the intersection of Computer Graphics, Biomechanics, Robotics, and Fabrication. More specifically, he is interested in models of motor control, motion planning, physics-based simulation and computational design methods. The overarching goal of his work is to develop autonomous virtual characters and legged robots that can move with life-like grace and agility. Stelian is now an Assistant Professor at ETH Zurich