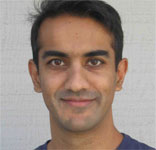 Akhil has spent his career designing—and working on teams that design—robots. His development credits include the Autonomous Walking Platform, an 11,000-pound, four-legged, 12-DOF walking robot; Lucky the Dinosaur, a 39-DOF free-roaming dinosaur figure; and the Wall-E robot, a tele-operated, life-sized version of the Wall-E character, which toured the world in support of the film’s worldwide release. Prior to Disney, Akhil licensed IP developed during his thesis research to Intuitive Surgical, where he then worked on the original DaVinci development team. Akhil earned his BS from UC Berkeley, and his MS and Ph.D. from MIT, where he was accepted as the Rohsenow Fellow in 1989. Awards include the MIT Carl G. Sontheimer Prize (1997), the Lemelson-MIT Student Prize (1999), the MIT Technology Review TR100 list (1999), the Themed Entertainment Association award for Outstanding Achievement in Technology (2004), and Imagineering’s Frank G. Wells Award for Teamwork (2004).

Dr. Madhani has pursued robot design, particularly novel actuators, transmissions and kinematic designs, for applications including tele-operation, manipulation, and walking. At Disney, he has studied robot design for the purpose of bringing film characters (CG and hand-drawn animation) to life in physical form.